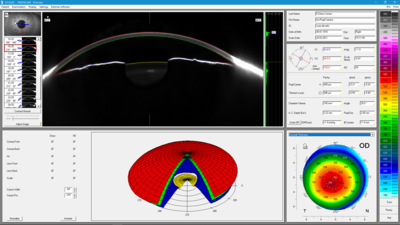 The General Overview provides important information on the keratometry and pachymetry of the cornea in concise numerical form. The Scheimpflug image provides opticians/optometrists and their customers with intuitive representations of opacities of the cornea or lens (cataract) or of the position of existing IOLs. The anterior chamber is described in terms of anterior chamber depth, volume and angle. When combined with IOP tonometry readings corrected for corneal thickness the General Overview permits an assessment of glaucoma risk. It also allows the display of all colour maps. 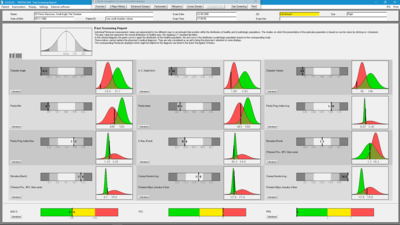 The Fast Screening Report provides a quick and simple overview that allows detection of irregularities in the anterior eye segment. Further displays for evaluating such irregularities in detail can be accessed via the navigation bar. Parameters are displayed against their normal distribution in healthy (green) as well as affected (red) populations as reported in published studies. The publication used in each case is identified under “Literature”. This display does not purport to give any kind of diagnosis. Diagnoses are the sole responsibility of the ophthalmologist and must be based on the entirety of information available.

Topography maps of the anterior and posterior corneal surface

The rotating measurement principle guarantees high resolution of the data points in the central cornea. Topographic analysis of the anterior and posterior corneal surfaces is based on the measured elevation data.

An overview display in colour shows the corneal thickness from limbus to limbus. The measured values can be displayed in a pre-determined grid or represented manually at any point at a mouse click. 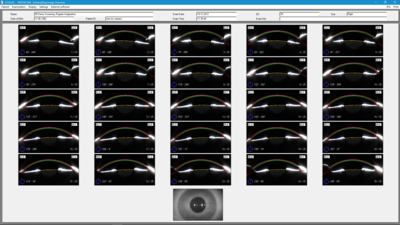 All Scheimpflug images are shown. This makes it possible, for example, to spot interferences with the measurement process (light, blinking etc.) at a glance. This display appears directly after completion of the measurement, providing the option of stopping further calculations and repeating the measurement. However, this is not intended as an alternative to the automatic assessment of image quality, displayed as QS (quality specification). It can reveal first signs of opacification of the cornea or crystalline lens. 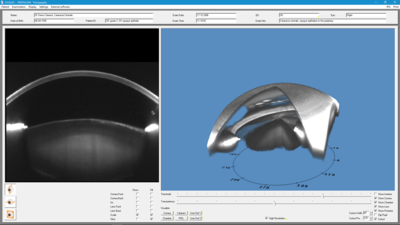 The rotatable, pivotable 3D model of the eye proves to be an enormous help when consulting with customers, as it permits the customer to see his or her eye from all sides so that irregularities can easily be explained. It provides a view of the anterior segment as a whole as well as separate views of the cornea and crystalline lens. 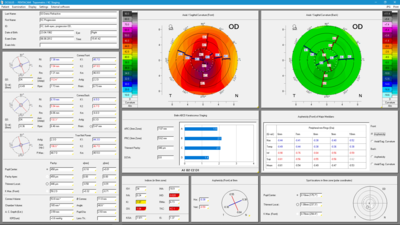 The rotating measurement principle guarantees high resolution output for the central cornea. The topographic analysis of the anterior and posterior corneal surfaces is based on the measured elevation data.

The new Belin ABCD Keratoconus Staging Display shows, at a glance, all parameters relevant to keratoconus classification, including the posterior corneal surface. The display can also be put to retrospective use, i.e., for classification of a patient’s earlier examination data. 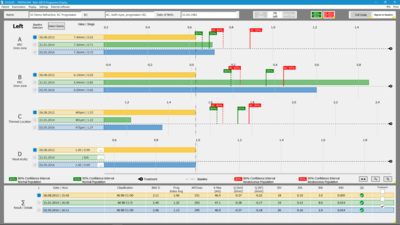 The Belin ABCD Progression Display allows direct comparison of up to eight exams per eye. The four parameters A (= anterior radius of curvature in 3 mm Zone), B (= back/posterior radius of curvature in 3 mm Zone), C (= corneal thickness at thinnest point) and D (= distance corrected visual acuity - DCVA) are displayed side by side to easily visually determine a trend of progression or depression (according to CXL). Each individual exam can be marked as baseline/reference (first exam by default) or as first exam after a cross-linking treatment (white/black bar line). The red and green lines describe the respective confidence intervals (CI). The red lines describe the group with keratoconus, the green lines the normal/healthy group. The solid lines indicate the 95 % CI and the dashed lines the 80 % CI. The Belin ABCD Keratoconus Staging (Topometric/KC-Staging) and the Belin ABCD Progression Display can be used retrospectively. 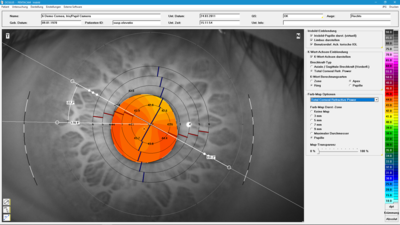 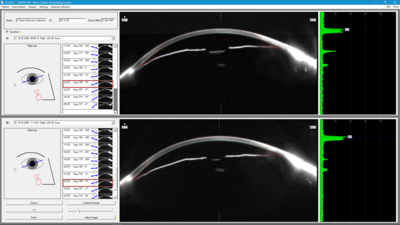 All available colour maps from two different examinations can be compared. The course or change over time is displayed in colour maps or numerically in Scheimpflug images. 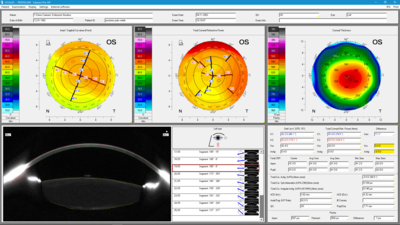 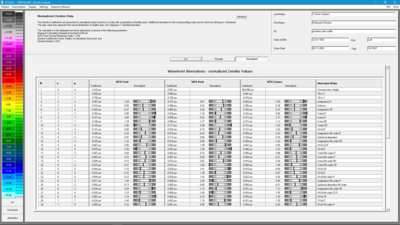 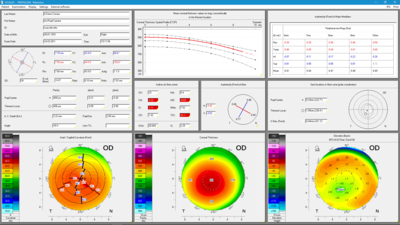 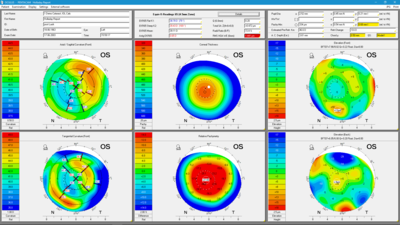 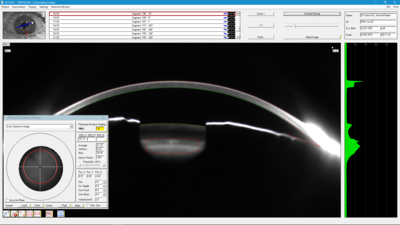 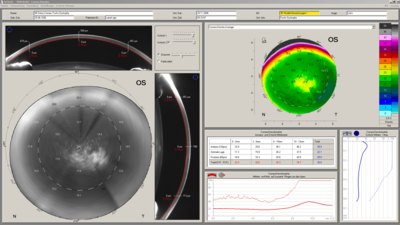 This software provides a standardized method of selective quantification of corneal opacities. The maximum and average corneal opacity is displayed in a colour map. Opacities can also be viewed in selected layers. Corneal opacities are shown for defined annuli and depths, facilitating uniform evaluation. This function served as a basis in the normative data studies listed below. 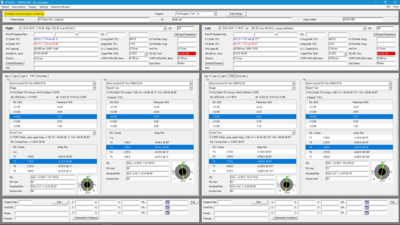 Originally developed for the Pentacam® AXL, the IOL Calculator is now also available in the Pentacam® HR. It offers space for up to 25 ophthalmologists to maintain their own set of up to 50 favourite IOLs. A large IOL database has been incorporated into the software for this purpose. If an IOL should ever be found missing, it can be added manually. Each user initializes their personal IOL Calculator by picking IOLs from their favourites list. If no further changes are made and everything has been set up as desired, the user only needs to load an examination, and the software will automatically calculate IOLs suitable for that patient. In doing so it takes into account the keratometry data, the induced astigmatism and the target refraction. Templates for calculating spherical, aspherical, multifocal, toric and toric multifocal IOLs as well as post-refractive-surgery IOLS are included. In addition to the standard formulas of SRK/T, Haigis, HofferQ, Holladay and Barrett Universal II it also provides Pentacam®-specific post-refractive-surgery IOL formulas derived from dedicated studies. The well-known double K formulas and the three Barrett formulas have been incorporated here as well. But the real highlight in the IOL Calculator is its ability to calculate toric IOLs based on TCRP (total corneal refractive power) according to Dr. Savini. Toric IOL calculation according to Barrett is also in the repertoire. After surgery the implanted IOL can be loaded from the templates and saved along with the date of surgery. After successfully entering the post-refractive outcome  (≥ 30 days) the examination can be earmarked for constant optimization. 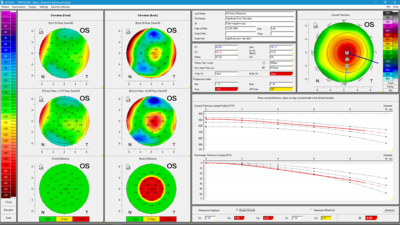 The Belin/Ambrósio Enhanced Ectasia Display is the first screening tool to combine anterior and posterior corneal elevation data with an evaluation of corneal thickness progression in a final parameter, referred to as Index D. Besides allowing for greater overall accuracy in diagnosing ectasia it can in particular assist in the early detection of this disorder. It determines the progression of corneal thickness across an array of concentric rings centered on the thinnest point and reaching into the periphery. Two elevation maps are generated, one based on a standard reference surface and the other on an enhanced reference surface, and the differences found between them are shown in a colour code to facilitate evaluation: green for unremarkable, yellow for conspicuous, and red for potentially pathological. 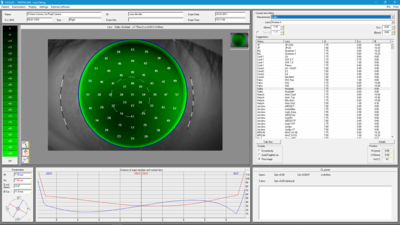